The Financial Action Task Force (“FATF”) was established in 1989 with a high level objective that: “Financial systems and the broader economy are protected from the threats of money laundering and the financing of terrorism and proliferation, thereby strengthening financial sector integrity and contributing to safety and security”. Ireland joined the Financial Action Task Force (“FATF”) in 1991 and underwent a Mutual Evaluation Review (“MER”) in 2006 as part of FATF’s third round of reviews. Following the publication of the report regular follow up engagement continued with FATF until 2013 when Ireland was deemed to have reached a level of compliance with the FATF recommendations that was sufficient to be removed from the regular follow up process.

FATF’s current methodology for assessing a country’s Anti-Money Laundering/Countering the Financing of Terrorism (“AML/CFT”) regime, which was introduced in 2013, consists of 2 components:

The technical compliance assessment looks at the requirements of the 40 FATF recommendations and the extent to which they have been implemented in the legal and institutional framework of the country. The effectiveness assessment looks at the extent to which the legal and institutional framework is producing the expected results, and focuses on 11 Immediate Outcomes (“IOs”). All components of the assessment are considered together below under the IO headings. A key to the FATF ratings, and full list of Ireland’s ratings can be found in appendices 1 and 2.

The visit took place from 3-17 November 2016. The final report (the “Report”) was adopted by the FATF at its plenary in June 2017, and published on 7 September 2017. Ireland’s ratings are largely in line with FATF member countries who have undergone a MER in recent years (see appendix 3).

Key Aspects of the Report

The Report begins by placing Ireland in the context of the global economy—Ireland is among the IMF’s 29 systemically important financial centres, the 4th largest exporter of financial services in the EU, and is ranked globally as the 5th most interconnected economy by McKinsey. All of the elements for effective AML/CFT control are present in Ireland, namely:

The Anti-Money Laundering Steering Committee (“AMLSC”) is responsible for AML/CFT policy development and implementation at a national level. Its members include:

Ireland’s first ML/TF National Risk Assessment (“NRA”) was published in October 2016. Although the AMLSC has formulated an AML/CFT action plan based on the NRA and consideration is also given to AML/CFT in the Policing Plan 2016, the Report notes that Ireland lacks national AML/CFT policies. The NRA could be improved by the inclusion of quantitative data which would validate or correct the assessment as presented in the NRA. It is suggested that the NRA could be further improved by taking into consideration cross-border risks, and the risk of abuse of legal persons and arrangements for ML/TF purposes. Understanding of AML/CFT risks and requirements in the private sector is reported as mixed, and more focussed on operational issues such as gathering of client identification documentation, with less consideration given to identification of ML/TF threats. The lack of an explicit requirement to conduct a risk assessment at business level is noted on the technical assessment as a gap in the legislative framework. This will be resolved with the implementation of the 4th EU Money Laundering Directive (“4MLD”) in Ireland.

Coordination among the police and other agencies is noted as a strong point for Ireland. Although the Financial Intelligence Unit (“FIU”) reported no issues in obtaining additional information from financial institutions (“FIs”) on Suspicious Transaction Reports (“STRs”) filed, the lack of a clear legal provision to do so is noted as a weak point. There are also various weaknesses in the FIU’s current IT infrastructure, which may limit the ability to analyse data, and to identify more complex cases of ML. The FIU’s imminent introduction of a new online reporting tool, “GoAML”, was noted as a positive development. The Report notes the need to formalise the role and independence of the FIU.

Ireland should ensure adequate resourcing of the FIU and ML investigation teams. In terms of prosecution for ML, although the burden of proof on the prosecution in ML cases was lowered in 2010, it appears there is still a difficulty in this regard, and prosecution of the predicate offence is often pursued over the ML offence as it is easier to prove and prosecutors see no additional benefit in pursuing both charges. The FATF assessment team did not find this to be a justifiable reason not to pursue an ML prosecution.

The Report concludes that Ireland has some of the characteristics of an effective system for confiscating the proceeds of crime. The Criminal Assets Bureau (“CAB”) was established for this purpose. However, improvements could be made in the pursuit of assets moved outside of Ireland, and in controls around cross-border transportation of cash.

There have been no prosecutions of TF offences in Ireland. This is noted as being inconsistent with Ireland’s risk profile. The threat of an attack related to international terrorism is assessed to be moderate (possible but not likely). As is the case with ML prosecutions the Irish authorities indicated that the burden of proof is high for these offences and so prosecution of the predicate offence, such as membership of a terrorist organisation, is more often pursued. The report recommends that separate consideration be given to TF as distinct from the threat of terrorism itself in the next NRA.

The Report notes there is a delay at EU level in transposing UN sanctions without delay, which has an effect on Ireland’s ability to comply. There is, however a good understanding of freezing and reporting obligations in the financial sector. The Non-Profit Organisation (“NPO”) sector, which has recently come under a supervisory regime, is noted as an area requiring further attention in respect of the TF risk and vulnerabilities in this sector.

In general, FIs are seen to have a good understanding of ML/TF risks. International organisations have a better understanding of cross-border risks. Fund Administrators were seen to have understood the need for and implemented internal systems and controls to mitigate ML/TF risks. More generally, controls and processes for higher risk customers and transactions are noted as an area requiring improvement as is Customer Due Diligence (“CDD”) on existing customers. Statistics provided on supervisory findings from 2013-2016 reveal that out of a total of 60 findings for the funds sector, 45 related to CDD. From a legislative perspective a gap is identified in relation to the requirement to perform enhanced due diligence on clients from higher risk countries as identified by FATF. Current Irish legislation prohibits the application of simplified due diligence for such countries, but there is no explicit requirement to apply enhanced due diligence. This gap has resulted in a single Non-Compliant (“NC”) rating under technical compliance for Ireland.

Technical compliance with recommendation 10 (CDD) was rated as largely compliant (“LC”), and it is noted that a number of the shortcomings identified will be resolved as a result of the implementation of 4MLD. In relation to the level of understanding of the risks within the private sector it is noted that there is a common tendency to place a strong reliance on local networks, which is seen as both a positive and a negative—while a useful resource it could lead to preconceived notions not supported by objective analysis. Overall, the level of STR reporting is seen as low, but the increase in the numbers of reports over the years is seen as a positive in that it reflects increased awareness. Attention is drawn to a low level of STR reporting in the funds sector (considering the medium-high rating assigned to the sector under the NRA), which the authorities should consider. It is recommended that the private sector deepen its understanding of ML/TF risks, while the authorities should seek to work more closely with the private sector to achieve this objective.

The Report notes that Irish supervisors generally promote a clear understanding of AML/CFT obligations, and to some extent, a clear understanding of ML/TF risks. The 4 sector-specific reports on AML published by the Central Bank of Ireland (“CBI”) were seen to have had a positive impact. The industry representatives who met with the assessment team indicated an appetite for further engagement and guidance from supervisors. The CBI, while having a good understanding of ML/TF risk within each sector it supervises, could do more to understand risks at an entity level. The CBI supervisory engagement model rates funds as medium-high (the 5 categories being low, medium-low, medium-high, high, and ultra-high), meaning that funds will be asked to complete risk assessment questionnaires every 2 years, and inspections will take place every 5 years (at fund administrator level). A selection comprising the larger entities among the 42 fund administrators in Ireland were inspected from 2014-2016, with more recent inspections taking place on smaller entities. The measures available to the CBI include a range of remedial actions and sanctions. The Report notes that no sanctions had been imposed by the CBI on senior management for AML/CFT violations to date, and the CBI is encouraged to consider this measure in future.

Through the CRO, Ireland has a central public resource of information on legal persons. Information on legal arrangements is held by the Revenue Commissioners, but is not publicly available. The NRA acknowledges that legal persons and arrangements may be misused for ML/TF and there is a specific acknowledgement that more work is needed to analyse the ML/TF risks of SPVs and other specialised areas. The Report encourages a more comprehensive assessment of all categories of legal persons and arrangements for the next NRA. The publication of regulations requiring the establishment and maintenance of beneficial ownership registers is acknowledged as a positive step by Ireland in this area. A question is raised as to whether the sanctions for non-compliance with these regulations are proportionate and dissuasive. Ireland is encouraged to take the next step and ensure that a central beneficial ownership register is established. The Report reveals that, pending a further decision by the EU, the central register for trusts, to be established by the Revenue Commissioners, will not be publicly accessible.

Irish law enforcement and supervisory authorities are seen as cooperating well with foreign counterparts. It is recommended that Ireland ensure there is legal provision for requesting information from Irish FIs when information is requested from abroad. Statistics on international cooperation should continue to be recorded, and it is noted that these statistics would benefit from some enhancement. A number of technical recommendations are also made in relation to international asset freezing, seizing, confiscation and sharing of assets.

Next Steps for Ireland

Ireland must report to FATF on progress in 2 years. FATF will visit again in 5 years to monitor progress on any of the outcomes rated as moderate. The Irish authorities will now take steps to bring the national AML/CFT framework closer to the FATF recommendations.

KB Associates offers a range of AML/CFT services to investment funds and management companies including:

1 IOs are presented here, not in chronological order, but in the order they appear in the Report.
2 Effectiveness ratings: high, substantial, moderate, low. 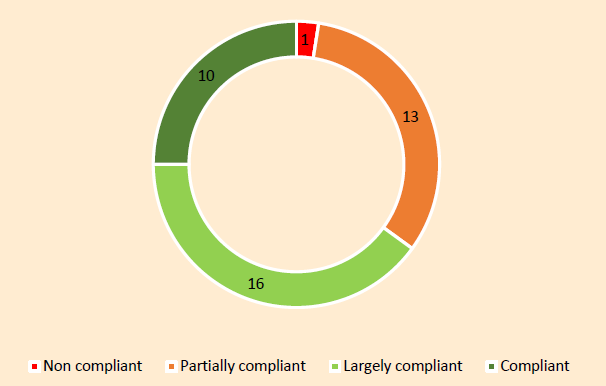 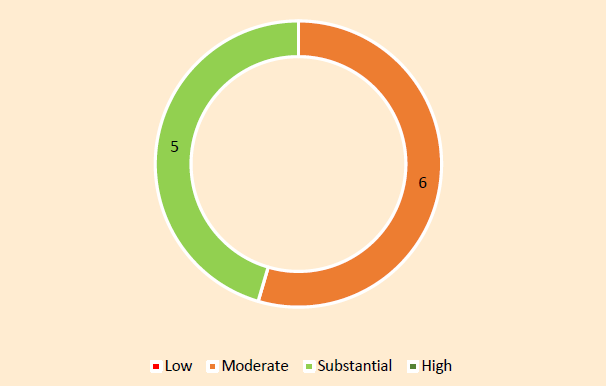 3. FATF Effectiveness Ratings under the Fourth Round of Assessments