2014 was a bumper year for European investment funds. UCITS sales reached a record high with €472bn in net sales despite the significant volatility in the markets in the latter half of the year. 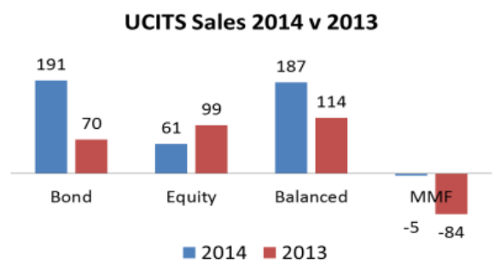 Interest rate expectations fuelled much of the flows into the Bond funds despite some concerns on interest rate increases towards the end of 2014. Balanced funds had a record year for sales as allocators sought the risk diversification benefits offered by these funds. Interestingly, 2014 saw the first reduction in balanced fund launches since 2010 which could potentially indicate a peak of inflows trend.

Equity fund net inflows, while positive for 2014 (€61bn), were down by 38% on the prior year. Asset allocators continue to show reluctance committing to equity funds citing factors such as poor global economic recovery, deflationary fears and geopolitical events (Greece, Russia and the Middle East). With the ECB’s large quantitative easing program beginning in 2015 we wait with expectation as to the coming quarters’ figures.

When we last discussed Italy (Q3 2013) the genesis of a recovery was taking place in the local funds market. In 2014, funds sold exclusively in Italy had sales of over €46bn, the highest for any single jurisdiction in Europe (source: Lipper). Comparing this to 2011, where Italy was ranked 32nd in Europe for fund sales and had suffered outflows of €34bn, it is a truly remarkable recovery. The Italian fund market is finally enjoying “La Dolce Vita”

Balanced strategies are at the forefront of the recovery accounting for 60% of net sales in 2014. Bond strategies make up much of the remainder with 30% of overall sales.

Driven by much of the success in their local market, there are now 4 Italian asset management groups within the top 20 groups for funds sales in Europe in 2014 (compared to 1 in 2011).

While the primary distribution channel is still local banks with their captive investor base there has been one significant change from our last update. 2014 saw the introduction of investment funds trading directly on the Italian stock exchange allowing retail investors to subscribe directly into funds rather than through an advisor or intermediary. This is a potential watershed in Italian distribution and will be watched closely by the market.

Ireland finished the year on a high note as domiciled fund assets grew to over €1.6tn. Driving this record high were annual growth rates of 22% and 29% for UCITS and Non-UCITS AUM respectively. The last time growth of this magnitude was recorded was in 2010 when assets levels were at €759bn.

Interestingly this growth has not been matched by a significant growth in fund numbers (7% for UCITS, 1% for Non-UCITS) indicating that existing products have been the primary catalyst of growth. 2 out of the top 6 selling funds in Europe in 2014 were domiciled in Ireland (these 2 alone accounted for sales of €10bn in the year). 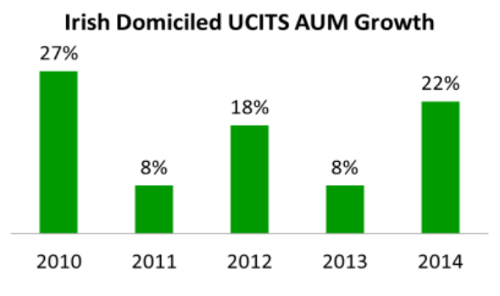 2015 is set to be a promising year for Ireland as it now sits second in Europe for fund AUM and it has also launched the ICAV, a new fund structure which offers features such as “checking the box” for US tax purposes and financial statements production on a sub- fund basis