The year 2015 was generally a weak year for global stock markets. Stock market movements in 2015 were impacted by a number of factors which included the slowdown in China, the sharp decline in oil prices, the strengthening of the US dollar affecting the overseas earnings of US companies and monetary policy interventions.

Despite the challenging market conditions, the European fund industry performed strongly with net sales of UCITS reaching €573bn. Overall net assets of UCITS increased by 13% in 2015 to €8,168bn. 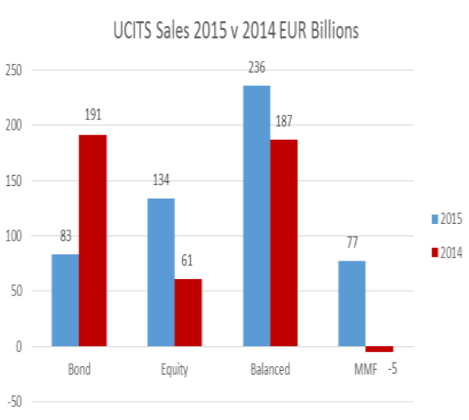 UCITS Equity funds recorded their best year since 2000 with inflows of €134bn. The strong performance in equity funds may be attributed to improving GDP figures in Europe, declining unemployment rates and confirmation by the ECB that they would extend quantitative easing into 2017 or beyond.

Bonds funds had net inflows of €83bn which is significantly down on 2014. This may be attributed to continuing low yields.

The German fund industry is one of the largest EU markets with a total of €2.6tn of AUM. In Germany, it is estimated that 50 million people use investment funds for their retirement.

Funds in Germany are split by retail funds and non-UCITS “Spezialfonds”. Spezialfonds may only be held by institutional investors which include insurance companies, pension funds and large corporations.

2015 was an excellent year for the German funds industry with a total of €193bn of net inflows to retail funds and Spezialfonds. Spezialfonds experienced record net inflows for the fourth year in succession. Balanced and equity funds recorded greater inflows than bond funds in line with the 2015 trend in Europe overall. 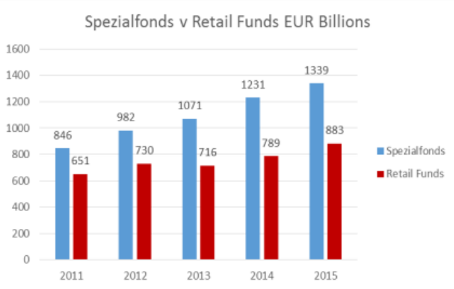 In the alternative space, the approval to commence marketing of non-EU AIFs by nonEU AIFMs in Germany has proven to be time consuming and can take three months or longer. It is clear that the potential extension of the marketing passport to non-EU AIFMs could provide opportunities in this key market. ESMA is expected to complete an assessment by 30 June 2016 on the initial list of countries which includes the USA. The Cayman Islands is in the second wave of countries. A realistic timeframe for the extension of the passport is 2018.

Irish domiciled funds grew to just under €1.9tn in 2015 which represented an annual growth rate of 14%. This growth was not as high as the incredibly high growth rate experienced in 2014. 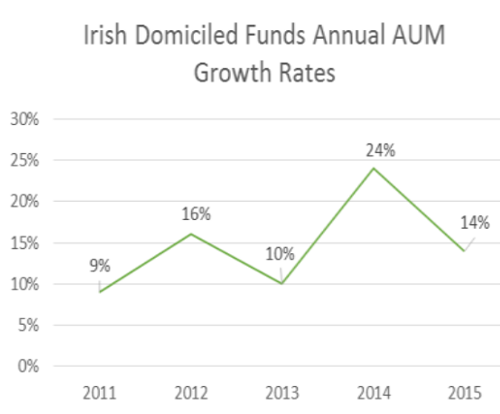 UCITS funds grew by 13% and the corresponding AIF figure was 16%. The growth in the number of Irish domiciled funds is lower at 6.3% which indicates that the AUM growth is primarily due to growth in existing funds.

2016 will be an eventful year for the Irish funds industry on the regulatory front. Key events include the transposition of UCITS V into national law in March, the deadline for compliance with the CP86 6 new management functions (expected during Q3), the implementation of Investor Money Regulations in July and the introduction of the EU Market Abuse Directive in July.