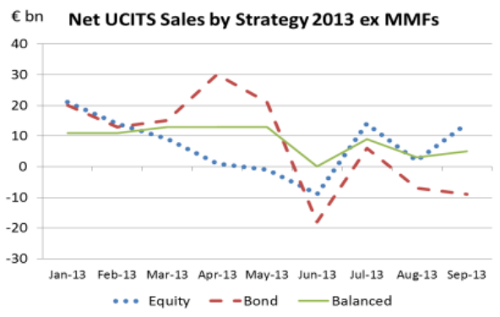 The impact of the reduction of quantitative easing in the US (indicated by the Fed Chairman in July but not yet implemented) sent shockwaves globally as allocators reduced exposure to debt (particularly to long dated and emerging market securities).

Coupled with some positive economic indicators globally (improvement in the US, UK recovery and reduced fear of a hard landing in China) the sentiment towards equities improved. While the basic requirements of some long term investors (pension funds) will be met by debt securities those with looser mandates are seeking “risk on” allocations again.

We noted in our last update the increased popularity of balanced funds. In the year to September, these funds have attracted net inflows of €78bn, the highest of all strategies in the UCITS universe.

12 months on from the initial introduction of the FCA’s Retail Distribution Review (‘RDR’) how has the UK market changed?

Prior to the introduction of RDR, investment managers determined how a typical annual management charge was divided up. In a post RDR world, this power appears to be shifting towards larger advisors and distributors. A report by Barclays estimates that advisers’ share of the value chain will increase from 33 per cent to 48 per cent*.

Firstly, fee compression has been one of the most significant changes. In an effort to secure deals on key distribution platforms, investment managers have been agreeing to “superclean” share class pricing. In essence these are share classes with annual management fees below the standard typically charged in the market.

Secondly, product type has certainly been a focus. Advisors seeking cost effective ways to gain exposure to market beta have increased allocations to ETFs at the expense of actively managed products. According to Ignites Europe flows into ETFs sold through some of the UK’s largest platforms have experienced double-digit growth since RDR came into force. The largest ETF provider in the market saw an increase in assets of 23% in 2013.

Lastly, figures released by the FCA in August 2013 estimate an 8.9% drop in the number of retail investment advisors since June 2012# , a trend that is set to continue.

Irish domiciled funds exceeded the €1.3bn mark in Q3 and now account for 13.8% of all European fund assets.

The growth of Irish fund assets in conjunction with the investment fund friendly environment has not gone unnoticed. In the last two years alone, 99 new promoters from 21 countries have established funds in Ireland.

Fund sales of Irish UCITS funds for the year to September were an impressive €50bn*, just under 30% of all UCITS sales. Net new money continues to be allocated to Irish funds with a clear split between money market funds and longer term funds. 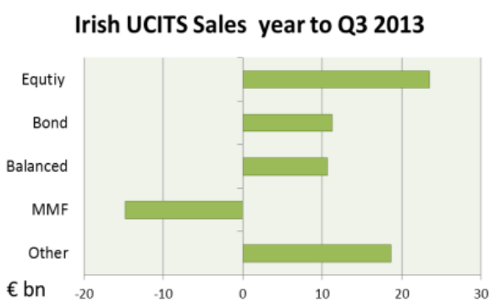 2014 is set to be an interesting year for Irish funds as AIFMD is finalised in July 2014 and discussions on UCITS V continue.