Bond funds continued to be the safe haven in the eyes of allocators as Q3 2012 saw net inflows of €51bn* into the asset class. This brings year to date bond fund inflows to a staggering €141bn. Equity funds continue to suffer outflows with investors withdrawing €10bn in Q3* and €28bn year to date. 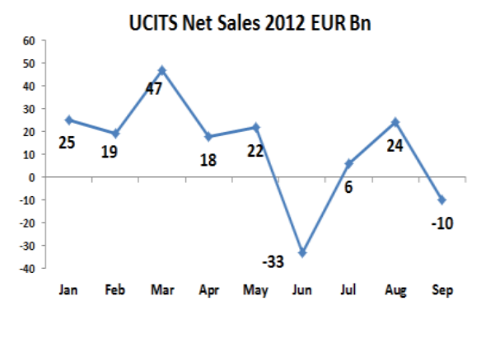 There are a number of trends and policies impacting on the markets at present:

These trends have led to the large allocations away from equities and into credit. It is noteworthy that with the increased asset sizes of bond funds, their share of the European funds’ market has dramatically increased from 20.2% to 28.5% in just 5 years.

Italian investors typically have a conservative view on investing. Credit has always been the most popular strategy as evidenced in the pie chart below. Interestingly, mixed funds have a larger share of the market than equities again driven by conservatism.

The size of the Italian funds’ market is estimated to be €450bn with foreign domiciled funds accounting for over 20% in asset terms.

In the year to September 2012 fund flows in Italy have been negative overall. Money market funds and equity funds suffered heavily with outflows of €5.6bn and €2bn respectively. Bond funds and mixed funds have been more resilient and have posted positive flows of €86m and €373m respectively. 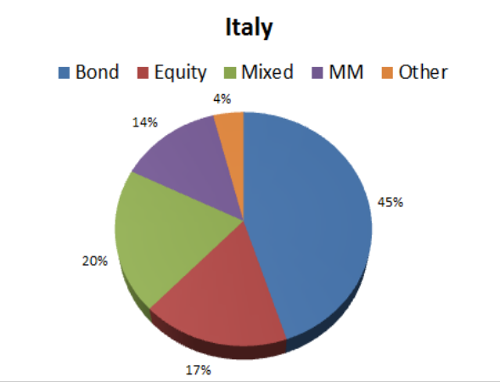 Retail banks are the primary distribution channel in Italy with 56% of all funds distributed in this way. Pensions (14%) and Fund of funds (10%) also play a large role. Institutions (8%), Private Banks (7%) and IFAs (5%) play a much smaller role but should not be discounted.

For the second year in a row Ireland has proven to be the domicile of choice for UCITS.

Figures released by EFAMA show that Ireland attracted 45% of all European UCITS fund flows in the first six months of the year and the highest flows for any single domicile.

Ireland has successfully negotiated an intergovernmental agreement with the United States in relation to FATCA. This is seen in many quarters as a significant boost to the Irish funds’ industry as it brings clarity to future requirements. 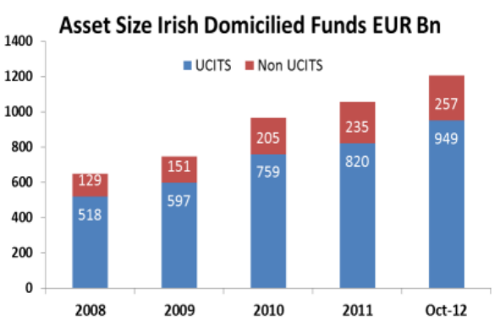 Irish domiciled UCITS continue to see increases in AUM with year to October growth of 15.7% and total assets of €949bn.