During Q3 2015 a slowdown of inflows into long term UCITS funds occurred (€55bn down from €114bn in Q2). European markets experienced the worst performance since the Eurozone debt crisis of 2011.

Equity funds had the lowest net inflows during the quarter (€13bn). This can be attributed to global factors such as the mass sell-off in Chinese stock markets, falling oil prices, the European immigration crisis, the ongoing problems in Greece, Russian airstrikes in Syria and the uncertainty relating to the timing of the raising of US interest rates. Credit and Balanced funds also experienced net outflows during Q3 with money market funds registering net inflows of €21bn which compares favourably with the net outflows of €30bn during Q2. It is clear that risk averse investors were seeking the safe haven of money market funds.

Despite the poor performance during Q3, UCITS net sales year to date were at €452bn which is an increase of almost 12% on the corresponding figure for the first three quarters of 2014. 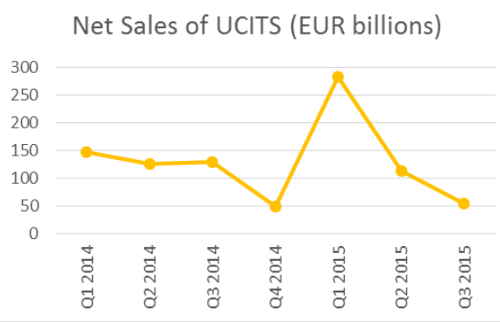 Spain is a relatively small fund domicile which accounts for 2.1% of combined European net assets (UCITS and AIF). Spain as a domicile accounts for just under 8% of the total number of funds in the European market. In the 2014 Towers Watson list of the world’s largest asset managers, four of the top two hundred asset managers were Spanish.

Retail banks are the main distribution channel in Spain accounting for over 60% of fund sales. The remainder of the market is split between institutions, fund of funds, private banks and IFA’s.

Due to regulatory capital requirements since the financial crisis, Spanish banks were promoting deposits over fund sales. This initially suited the traditional conservative nature of Spanish investors. However with ECB interest rates at very low levels, Spanish investors have increased their investments in funds with Spanish fund net assets increasing by 59% since 2011. 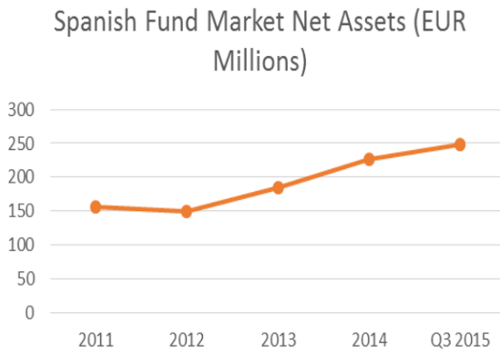 As of Q3 2015, Spain recorded the fourth largest year to date UCITS net inflows in Europe. The net inflows of €30bn represented a small 2% increase on the corresponding figures for 2014. In 2015, balanced funds have accounted for the vast majority of the net inflows with 88%.

Irish UCITS funds had outflows of €71bn in the third quarter of 2015 bringing AUM to €1.34tr. Overall assets in Irish domiciled funds (UCITS and AIFs) decreased by 4% to €1.78tr.

Growth in the number of sub funds was quite flat with a 1% increase. In line with the overall European market growth in money market fund assets, total assets in Irish money market funds grew by 5% in Q3 2015. 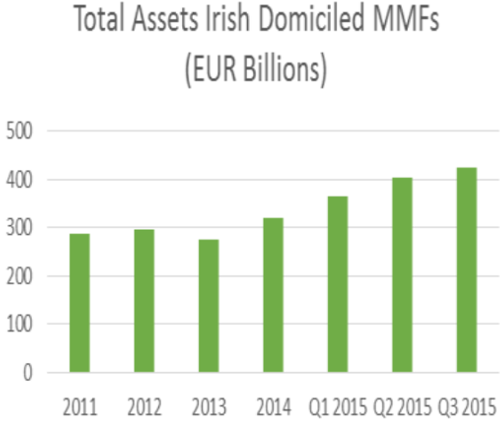 In late 2015, the Central Bank of Ireland issued the CB UCITS Regulations which consolidated into one key location all regulatory requirements applicable to UCITS, UCITS management companies and depositaries of UCITS. This is a welcome development for UCITS in Ireland as it brings additional clarity to the rules applied by the Central Bank.