Q3 2019 was characterised by the continued bond rally (42% of total Q3 2019 net sales) however outflows from equity funds have slowed down as can be seen in the chart below. 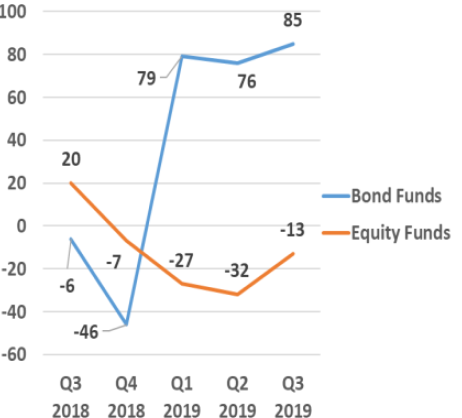 More accommodative monetary policies in Europe (new round of stimulus) and the USA (further Fed rate cuts) and the market’s assessment that this stance will remain in place for a significant period continued to drive the bond fund rally.

Continued downside risks relating to trade policies (China/US) and geopolitical risks (Italian Government coalition broke up and a fourth Spanish election in four years) weighed on European equities. Sluggish economic data in the Eurozone was also a factor with growth in Q2 at just 0.2%. Inflation was down at 1% in August which is much lower than the corresponding figure in 2018. 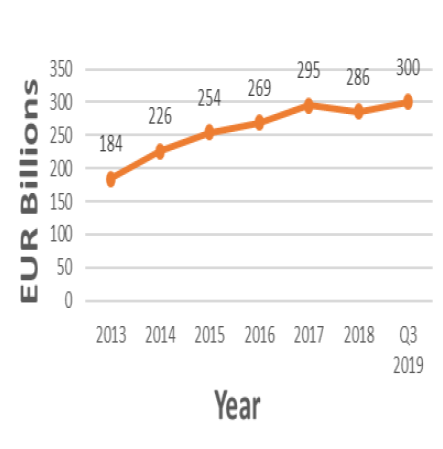 Spain is the 9th largest market for the distribution of Irish funds with 1,935 Irish funds registered there. Approx. 90% of fund distribution in Spain is channelled through banks (including cajas or savings banks). Insurance companies, independent financial advisors and robo-advisors make up the remainder of the market.

In early 2019, ESMA published an analysis, which showed that costs for Spanish domiciled funds did not compare favourably with other European countries. This has resulted in a review by the Spanish financial regulator, CNMV. It was reported in late 2019 that the CNMV will start asking Spanish managers to include liquidity warnings in their KIIDs where they invest in highyield bonds or small cap equities.

Irish domiciled fund assets increased by over 8% in Q3 2019. 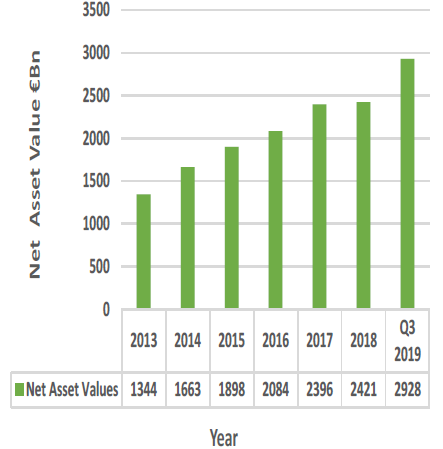 The CBI recently issued an updated Q&A on UCITS, including guidance to managers investing in illiquid assets. Regulators across the EU, led by ESMA, are taking a consistent approach to probe liquidity management processes in UCITS. It follows the 2019 high profile cases in H2O and Woodford. The CBI has stated that UCITS, which are marketed to retail investors, which invest in CLOs, CFDs and contingent convertible bonds will be subject to increased scrutiny. The use of CFDs is particularly common with long/short equity UCITS funds to gain short exposure. The CBI has stated that the CFD restrictions will consist of limits on leverage and a margin close (positions closed if you drop below margin requirements).