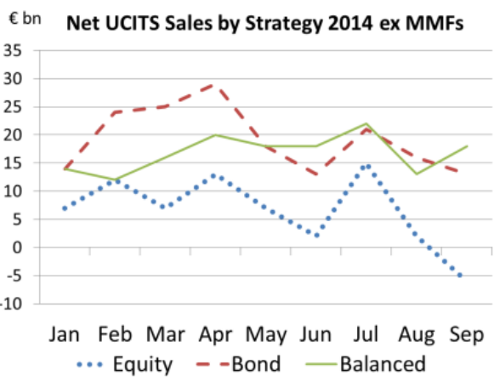 In contrast to the strong headline figures, equity funds have shown particular weakness. September 2014 recorded the first monthly outflow (€6bn) for equity funds since June 2013. Much of this weakness can be attributed to increased market volatility, deflationary fears in Europe and geopolitical events. Data recently released for October 2014 indicates further outflows from the asset class as volatility increased significantly (MSCI World fell by 6% during the month before rallying and ending up 1.6%).[source: MSCI]

Bond and Balanced Funds continued to attract flows in the quarter fuelled by investors seeking yield following a series of rate cuts by the ECB and potential quantative easing (which may result in sovereign debt being purchased by the ECB).

Increasingly the role of central banks is having a significant impact on the markets and this will continue to affect flows in 2015 (some market commentators suggest a rate rise in the US in mid-2015 which will have global repercussions).

The Nordic region (usually considered Norway, Denmark, Sweden and Finland) has come into the spotlight in recent years with its resilient funds market catching the attention of foreign asset managers.

So what are the opportunities? As at Sept 2014, Denmark and Sweden have the largest UCITS AUM in the region with €224bn and €239bn respectively. Norway has UCITS AUM of €103bn and Finland has €83bn.*

Sweden is often seen as the most accessible country due to its highly developed fund market. It is estimated that 76% of 17-76 year olds in Sweden utilise funds for savings and pension purposes (Sweden has a mandatory pension contribution system). This is in direct contrast with Norway where saving through funds is limited (Norway owns the largest sovereign wealth fund in the world valued at approximately €767bn and holds 1.3% of the world’s listed companies). 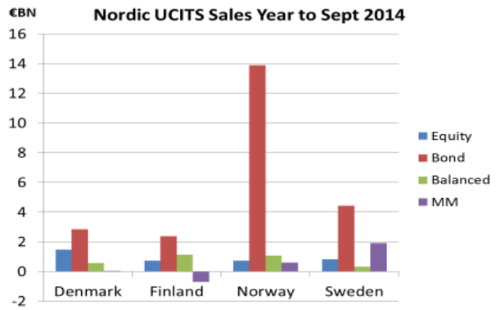 Distribution is dominated by local fund providers and retail banks. Largest players are Nordea, Handelsbanken, SEB, Swedbank, Danske Bank and DNB. Estimates put a figure of 15% on assets controlled by non-Nordic managers in the region and key to this success is access to distribution channels. *Source: Ignites Europe/EFAMA

Ireland recorded a new high of €1.6 trillion AUM for domiciled funds in September 2014. Two key drivers of the increase were the launching of an additional 500 funds and a doubling of net inflows compared to the same period in 2013. 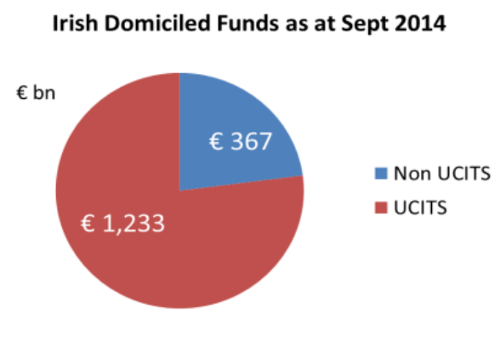 Interestingly Ireland has now surpassed France in terms of money market fund assets (€312bn versus €305bn**). France has been the historic centre of money market funds in Europe and this is a further blow in light of Ireland surpassing France as the second largest European fund domicile on an overall basis in the previous quarter.