In Q3 2016 UCITS fund net inflows were a healthy €129bn compared to net inflows of €71bn in the second quarter. 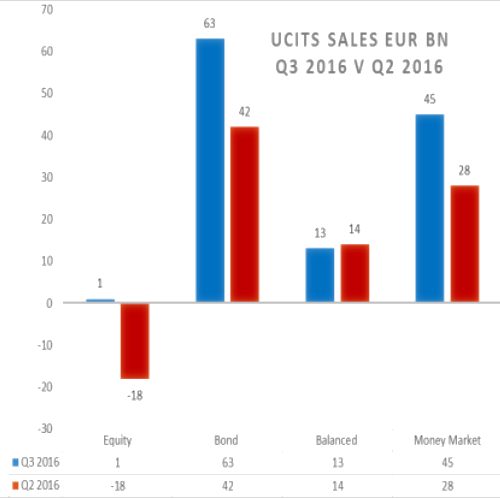 Twenty four European countries registered net inflows in the third quarter with the main European cross border domiciles (Ireland and Luxembourg) and France recording the largest net inflows. Net inflows of over €1bn were recorded in eleven countries. Much of the inflows were driven by credit/bond and money
market funds.

Strong corporate bond performance contributed to the increase in the demand for bond funds in Q3. Other contributing factors included the fact that the FOMC in the USA held the Fed rate unchanged in Q3, the Bank of England announced a monetary easing package and the ECB decided to leave current support measures in place.

The outlook for equities appears more positive with overall volatility in Europe lower than in Q2. However Eurozone economic data points to limited growth and low inflation. Deutsche Bank share prices plunged on news that US authorities had issued a fine relating to the mis-selling of mortgage securities in the USA.

The total net assets of investment funds domiciled in Italy is €285bn. Net asset growth has been steady. 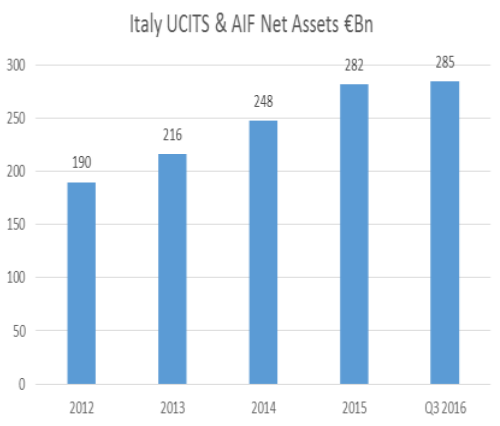 Notably, there are 3 Italian owned asset management groups in the Towers Watson 2015 top 100 rankings (Generali, Intesa SanPaulo & Pioneer). They dominate the local market. In 2016, Pioneer was sold to the French group Amundi.

In recent years, the Italian market has been one of the bestselling markets for cross-border funds with net inflows of €91bn recorded in 2014 and €95bn in 2015. The large fund inflows were attributed to Italian investors moving money out of low-yielding bank deposits. In 2016, the demand for funds has slowed resulting in lower inflows.

Local banks in Italy are the main distribution channel. Many Italian banks have recently expanded their asset management divisions and have increasingly focused on selling their in-house funds in addition to third party funds.

In 2016, the value of equities focused on Italian stocks fell by over 30%. This is mainly due to the recent banking crisis and uncertainty after the resignation of the prime minister. 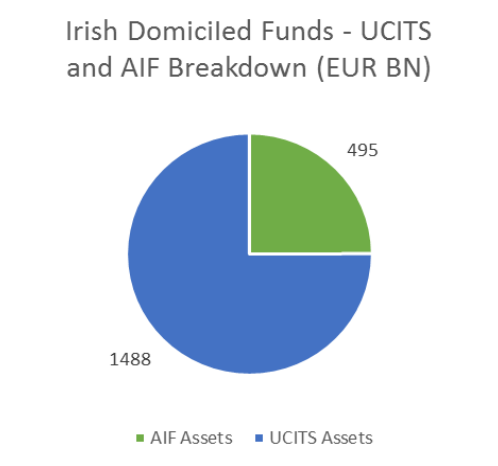 Irish domiciled ETFs currently account for over 50% of the European ETF market with most of these listed on the London stock exchange. One of the key selling points for Ireland as a domicile for ETFs is that an Irish domiciled ETF can currently avail of a 15% withholding tax rate when investing in US securities while a 30% rate is imposed for ETFs domiciled elsewhere.

Following recent OECD recommendations, Ireland is negotiating a “Model Tax Treaty” with the USA which could mean that only ETFs listed on the Irish stock exchange could continue to benefit from the lower tax rate. This topic has attracted much industry attention and commentary in recent months

You can download a copy of our Funds, Flows & Facts – January 2017 here