In the first three quarters of 2017, UCITS and AIFs registered net sales of €761bn which is higher than the entire net sales of 2016 and sets 2017 on course to outperform the record figures which were seen in 2015.

All categories of UCITS registered net inflows with bond funds the best performing category followed by multi-asset funds and then equity funds. There was positive Eurozone economic data released during the quarter (an increase in GDP growth and a decrease in unemployment). The growth in bond funds is expected to reduce in the coming quarters as the ECB announced in October that it will reduce its monthly asset purchase programme from the start of 2018. 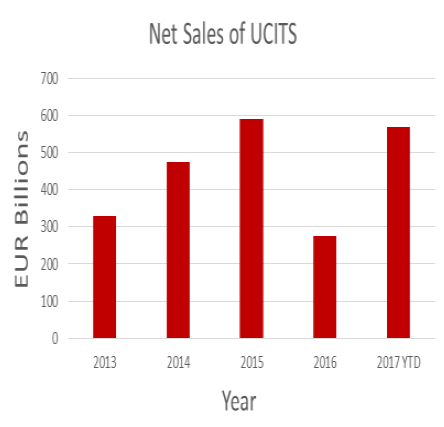 A total of 26 countries registered net inflows during Q3 2017. The 5 domiciles with the largest inflows were Luxembourg, Ireland, France, UK and Germany.

The quarter also saw net inflows into money market funds which contrasted with Q2 outflows. The popularity of UCITS ETFs continued with inflows registered throughout 2016 and 2017. The main European ETF domiciles of Ireland, France and Germany all experienced strong cumulative year-to-date net sales in 2017.

Traditionally, the ETF industry has been dominated by passive products that are based on market capitalisation weighted indexes that represent the market. Smart Beta ETFs combine both passive and active investing and try to outperform the market at low costs. They are passive as they track an index but active as they take account of other factors. They focus on areas of the market that can be exploited and seek to increase returns while reducing portfolio risks. The most common type of smart beta ETF screens stocks that offer higher dividend growth or better risk return performance than the market.

In December 2017, it was reported that the global AUM of Smart beta ETFs reached the $1tn milestone. 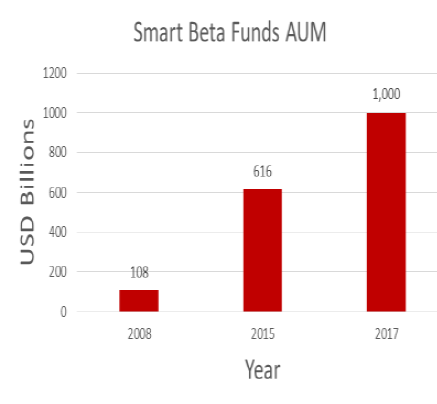 In 2017, smart beta ETFs attracted over $70bn in new inflows. This represents the fastest rate of growth since 2009. 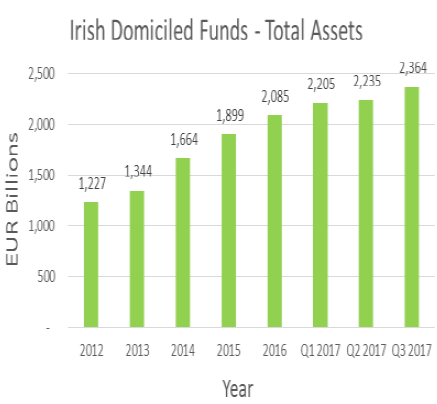 In December 2017, the CBI contacted local fund firms requesting details of their contingency plans to deal with Brexit. The CBI has asked that all firms provide documented plans by February 28 2018.
The CBI has noted increased engagement with firms that are considering applying for authorisation as an AIFM in Ireland due to the uncertainty regarding the AIFMD passport in the UK post Brexit.