The first quarter of 2015 saw significant growth for UCITS funds with net inflows of €285bn. This was an increase of 92% on the same period in 2014 and over a fourfold increase on Q4 2014. This significant increase can be linked to the positive sentiment created by the quantitative easing (‘QE’) program introduced by the ECB in March 2015. 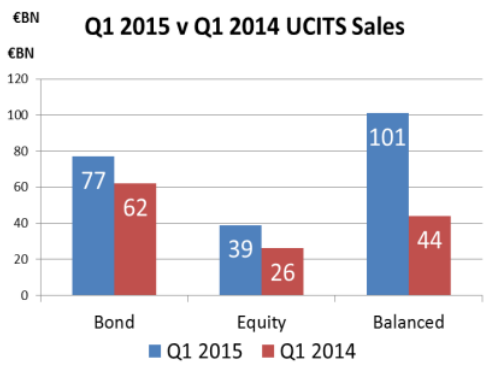 Balanced Funds were the significant winners in the period, with net inflows of €101bn (double that of the same period in 2014). In Italy for example, a jurisdiction known for the domination of bond funds, Balanced funds represented effectively all sales in Q1 (€11bn).

Bond funds (€77bn) and Equity funds (€39bn) also had positive flows in the quarter. Equity flows are still the lowest of the three strategies. This is a function of allocators’ “risk-off” attitude coupled with relatively high valuations for some sections of the equity market (most notably the US). Geopolitical risks abound (Greece) and with some poor economic numbers being released for the Chinese economy we predict further muted inflows into equities.

There are few, if any, safe havens for investments currently so those strategies offering downside protection should fare well over the coming quarters.

France is one of the largest EU countries from an economic perspective and has a significant funds sector. Assets of locally domiciled funds are €1,715bn. Interestingly, just over half of all funds assets (55% – source: Lipper) are housed in money market funds which have been a mainstay of the French Industry. 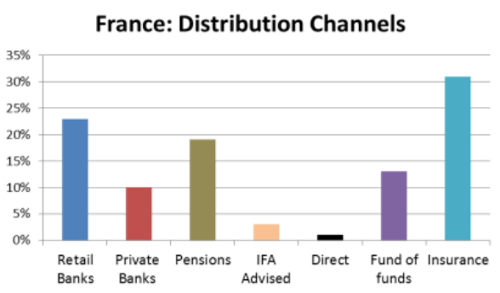 A significant change to the French distribution landscape has been the introduction of AIFMD in 2014, legislation that allows EU hedge funds to be marketed on a pan-European basis. Traditionally, French regulations on the sale of hedge funds have made the distribution of such funds virtually impossible on a large scale so clearly this is a significant watershed.

Fee retrocessions are still very much part of the funds landscape (such fees are banned in the UK and the Netherlands). Interestingly the French regulator has stated that it will not introduce MiFID II for local asset managers thereby reducing the possibility of the removal of such fee retrocession.

While the asset-raising by international managers is quite nascent we do expect this to increase in the coming years.

Irish UCITS funds have inflows of €49bn in the first quarter of 2015 bringing AUM to €1.4tr. Overall assets in Irish domiciled funds (UCITS and AIFs) increased by 14% to €1.9tr.

Growth in the number of sub funds was quite flat with a 1% increase. Annual growth in fund numbers since 2010 has on average been 5.9% but there has been a slow decrease in the last two years (2013: +5.5%, 2014: +4.0%). A criticism of the European fund markets has been the very high number of funds in comparison to the US market and the decrease indicates early stages of the rationalisation of European fund numbers. 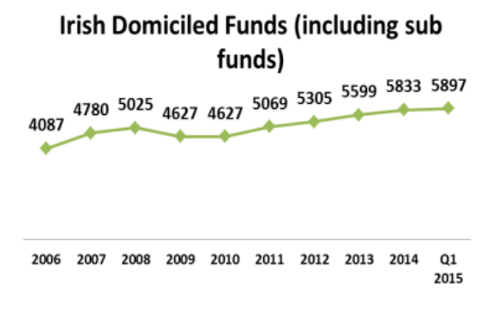 ETFs are back in the spotlight again as the debate between active and passive management heats up (a topic of particular interest at this years’ Fund Forum). Ireland is well positioned strongly to take advantage of the increase in passively managed funds as 49% of all European ETFs are domiciled in Ireland.