The first quarter of 2017 was characterised by gains in Eurozone, global and UK equities. In the Eurozone, the PMI reached a six year high in March and inflation increased. Political worries in Europe were less of a concern with fears of far-right election victories in both France and the Netherlands receding. The quarter also saw positive returns in the credit space in line with equities. 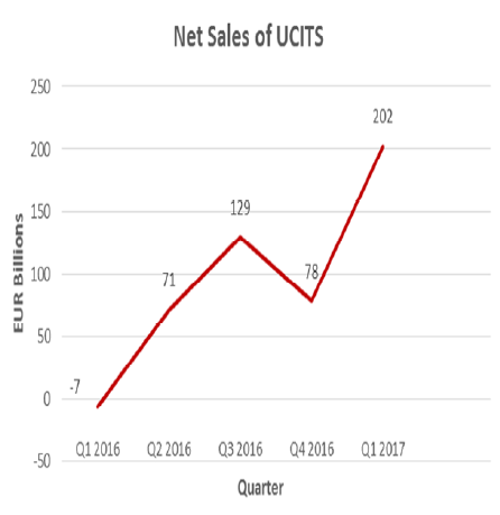 Central banks continue to have a significant impact on markets with the Fed raising interest rates and the ECB signalling its intention to slow down its monetary easing policy. Traditionally an increase in interest rates would lead to a decrease in bond fund allocations but it appears that investors have formed the view that inflation and future interest rate rises will occur at a slow and gradual pace.

France has a significant funds industry with the domicile ranking second in Europe for AIFs (18% market share) and fourth for UCITS (9.4% market share).

UCITS funds account for 46% of French domiciled funds with the remainder being in AIFs (note the AIF classification includes certain bond, equity and money market funds). A breakdown of the categories of French domiciled UCITS is in the chart below: 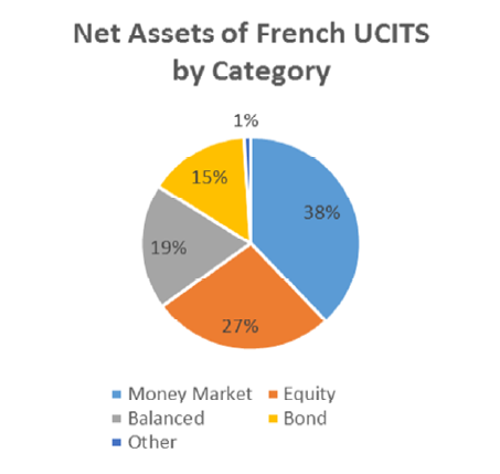 France differs to other countries as rather than having one dominant distribution channel, a number of channels have sizeable market share including retail and private banks, pensions and insurance companies.

The election of Emmanuel Macron was seen as a positive development by French asset managers in Q2 2017. Macron was viewed by many in the industry as a “pro-European, pro-reform and pro-business candidate”. Fund industry players in France have encouraged the French authorities to relax France’s labour laws, simplify regulations and lower taxes on business and capital in a bid to  attract additional asset management activities to Paris in light of the Brexit vote. 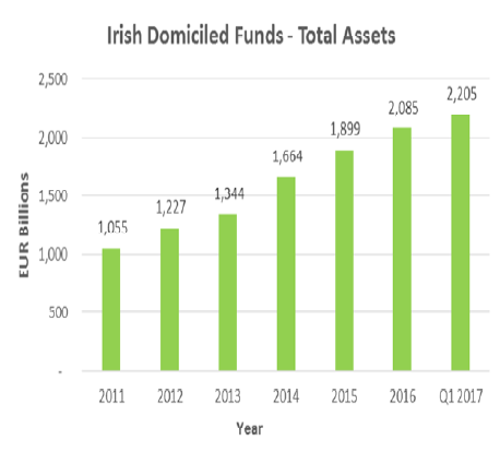 In October 2016, the Central Bank of Ireland (“CBI”) conducted a survey covering all providers of Irish authorised ETFs. In May 2017, the CBI published a discussion paper on ETFs which was an information gathering exercise and covered areas such as ETF dealing, ETF risk factors, particular types of ETFs and ETFs & market liquidity. Ireland is the leading ETF hub in Europe, with over 50% of European ETFs domiciled in the country. The CBI is therefore expected to have a significant voice in any future European discussions on ETF regulation. Several national regulators have recently expressed concerns around issues such as liquidity and transparency in relation to ETFs.