Fifteen countries registered net UCITS inflows in Q1 2019 with eight countries recording net inflows above €1bn. The countries with the largest inflows are summarised below: 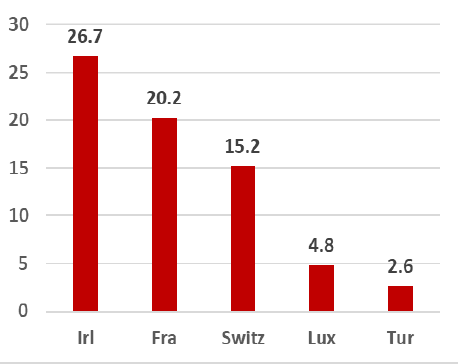 In Q1 2019, net sales of UCITS bond funds were €79bn compared with net outflows of €46bn in Q4 2018. The quarter was characterised by central-bank dovishness with the Fed advising that it would not raise rates again in 2019. The ECB also announced that it would keep rates on hold until 2020 and would offer new loans to support the weakest banks.

On the other hand, European UCITS equity funds witnessed net outflows of €27bn in Q1 2019 which is a big increase on the Q4 2018 net outflows of €7bn. This was mainly as a result of weaker economic data. In March 2019, the Eurozone PMI slipped to 47.6, below 50 indicates contraction. In Q4 2018, major Eurozone economies such Germany saw zero growth and Italy slipped into recession for the third time in a decade. Sources: EFAMA, Schroders, Broadridge.

The French asset management industry is significant and 3 of the top 25 asset managers worldwide by AUM are French – Amundi, Natixis and AXA. In terms of country of domiciliation, France is the 4th largest market in Europe with AUM of €1.89tn and market share of 11.6%. 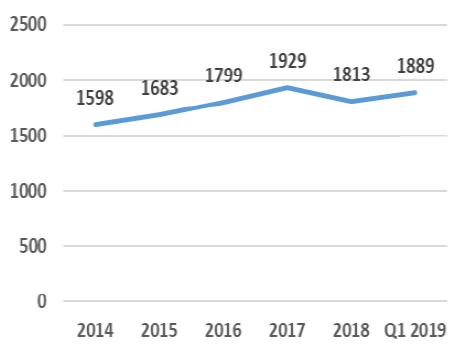 France is the 3rd largest market for Irish funds. There are currently 2,746 Irish funds registered there. France does not have 1 dominant distribution channel. A number of channels have sizeable market share including banks, financial investment advisors and insurance companies.

The AMF in France is seeking to establish a regulatory framework in the cryptocurrency sector as the country seeks to be a pioneer in the space. It has also put forward recommendations to improve disclosures to investors regarding ESG investment funds.

The French asset management association, ASG, has made recommendations to improve the competitiveness of the local fund market. This relates to modernising market infrastructure, reforming France’s fiscal framework and supporting innovation. The ASG is also pushing for amendments to MiFID II rules on investment research. Sources: Ignites, Irish Funds, EFAMA. 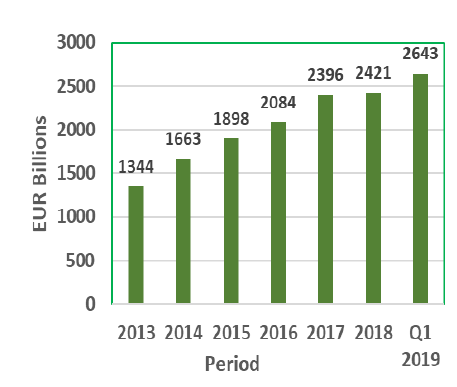 The CBI recently published its thematic review on closet indexing. The CBI stated there is an onus on fund boards to consider if fees charged are “appropriate for the targeted level of outperformance”. The CBI also contacted all Irish ManCos and self-managed funds to ask them to submit responses to a survey on CP86 providing information on areas such as governance and business models, delegate oversight and director time commitments.

The new Irish Investment Limited Partnership (“ILP”) structure for private equity funds is expected to be available by the end of 2019. New ILP updates include greater flexibility to allow changes to LP agreements and an ability to create ILPs as umbrella funds. Sources: Ignites, Irish Funds.