The first quarter of 2012 brought some much needed positive news in Europe with inflows for long term funds (€91Bn) being the highest seen for an opening quarter since 2007. Bond funds experienced the largest sales with some €49bn of inflows for Q1.

The ‘risk on’ sentiment in European markets was driven mainly by the positive view taken by investors of the impact of the ECB longer-term refinancing operation (‘LTRO’) on funding and liquidity in the banking sector. LTRO is also seen as adding to the overall stability in the markets. 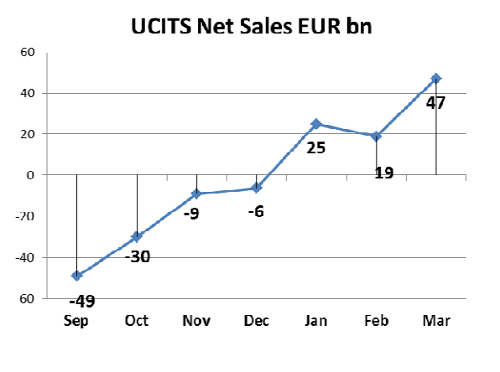 In March, Bond funds had the largest net inflows (€26bn) accounting for over 80% of flows into long term UCITS for the month followed by much smaller flows into Balanced Funds (€3.8bn) and Equity Funds (€1.5bn).

Over the last 5 years there has been a steady move away from managed accounts to mutual funds by Swiss institutional investors (mutual fund assets in Switzerland have tripled in asset size over this period*).

There is also an increasing trend in the use of non-proprietary funds by the private bank and wealth management channels in the country giving international fund managers further access to investors and in particular to the lucrative HNWI segment. 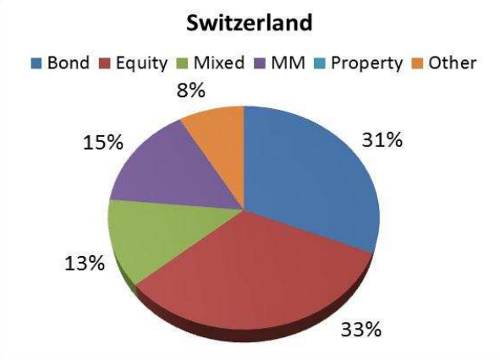 Private Banks are the primary distribution channel for funds accounting for 45% of all fund sales. Insurance companies (14%), retail banks (14%) and pensions (7%) also play a significant role.

The assets of Irish domiciled UCITS and Non-UCTS funds made more records this year with a combined AUM of €1.1 trillion at the end of March 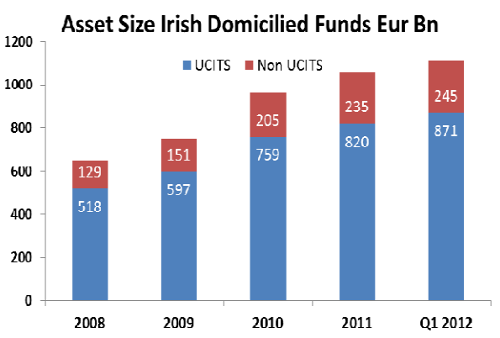 The number of funds domiciled in Ireland rose slightly to 5,077 in Q1 and coupled with the 6% growth in overall AUM adds to a positive outlook for Irish funds.

With the alternative fund space focus on increased regulations, Ireland’s Qualifying Investor Fund (‘QIF’) is seen by many as a viable fund vehicle and ‘AIFMD ready’.

The assets in Irish QIFs have grown by 66% over the last three years – a clear indication of the appetite for the product and the move by many managers to this structure.