The first quarter of 2013 saw much welcomed inflows across most strategies with a buoyant sentiment leading to a number of new records being set. 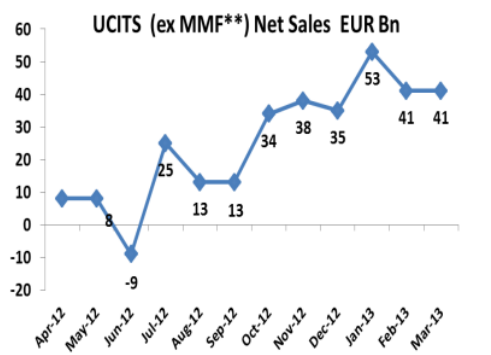 The records set in January were driven equally by bond and equity funds (equity funds had inflows of €21bn, bond funds €20bn), a change from recent quarters

Allocators have finally begun to make ‘risk on’ selections with equity funds seeing Q1 2013 inflows of €43.6bn. This softening approach to risky assets is further highlighted by a significant increase of inflows to small cap funds.

By no means does this indicate that the bond fund juggernaut has relinquished its grasp on European markets. The last recorded net outflows were in November 2011 and since then bond funds have accumulated over €250bn. Q1 2013 alone, has seen €47.5bn flow into the sector and the latest indications show no sign of a slowdown

The Spanish investment fund market is one that is dominated by local asset managers, the majority of which are banking institutions. Unsurprisingly, the distribution landscape is dominated by retail banks although other channels are growing in significance.

Spain has been at the forefront of open architecture in Europe for quite some time. The emergence of platforms such as Tressis, Banco Inversis and Allfunds (the joint venture between Banco Santander and Intesa San Paolo) is testament to this. For many managers, such platforms have been the gateway into the €150bn Spanish market.

Since the financial crisis, banks have promoted deposits at the expense of fund sales for capital purposes. Following the deposit ‘war’ that ensued, the Spanish regulator took measures that have ultimately resulted in a revitalisation of fund sales in 2013 (Q1 2013 saw net UCITS inflows of €4bn). 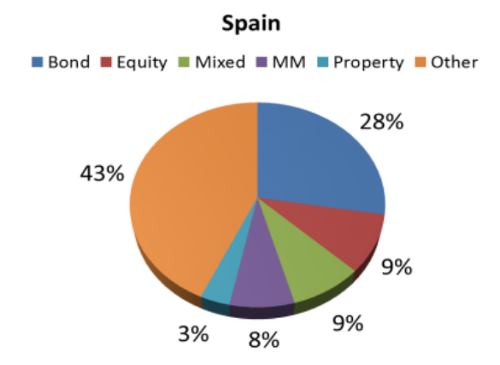 Retail banks are the dominant channel accounting for 65% of fund sales. The remainder is split between institutions 12%, fund of funds 7%, private banks 6%, pensions 5% and IFA advised 5%.

Notably, Ireland became the first jurisdiction to accept applications under AIFMD allowing many asset managers to gain a first mover advantage. The implementation date of AIFMD is 22nd July 2013 although some transition arrangements are in place.

The QIF (Ireland’s AIFMD compliant fund vehicle and soon to be renamed QIAIF) has enjoyed double digit growth in AUM in Q1 2013. 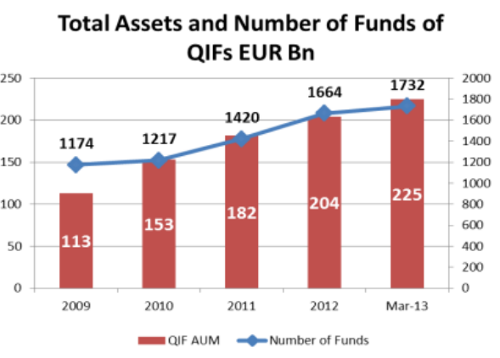