2014 fund flows began with a blistering start with net inflows of €147bn recorded for Q1. Bond funds enjoyed the lion’s share with €62bn. Balanced funds €43bn, Equities €28bn and Money Market funds €14bn were all in positive territory as well. 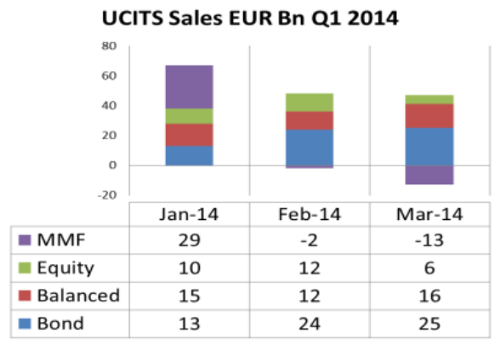 Given the popularity of credit funds it seems appropriate to look at some of the key market drivers. Under the guidance of the new Chair Janet Yellen, the Fed has continued to taper its quantitative easing programme raising concerns about the stability of the overall markets (particularly equities). US interest rates remain low resulting in many market participants being forced further out the yield curve than their ‘preferred habitat’. In Europe, interest rates remain at historically low levels and with little upward movement predicted. Of note is the persistence of low inflation in the Eurozone – in March 2014, prices rose by just 0.5%* on the previous year.

Other notable market developments in Q1 were the change of government in Italy, a rotation towards defensive stocks in the US, the crisis in Ukraine and the emergence of weaker macroeconomic data from China all of which lead allocators to be more cautious on their equity exposures.

Notwithstanding the overall positive trend, 2013 was a difficult year for fund sold exclusively in the country. Lipper’s data notes net outflows of €5.8bn driven primarily by commodity, equity and moneymarket funds. Early indications are for a much stronger 2014 with equity funds rebounding strongly.

Key to many cross-border managers’ success is the relative openness of the Swiss market to non-domestic funds. It is estimated that over 40%** of fund sales can be attributed to cross-border funds such as those located in Ireland. Coupled with an overall funds market size thought to be in excess of €600bn**, opportunities abound.

There are two dominant players in Swiss distribution, UBS and Credit Suisse. They are not only the top two fund providers but also the top two platform providers**. It is important to note that on a regional (or cantonal) basis, the Swisscanto platform has extensive coverage. Equities are the dominant strategy choice followed closely by bonds as seen in the below:

Asset growth in Irish domiciled funds continued into 2014 with an impressive increase of 4.2% recorded for Q1. 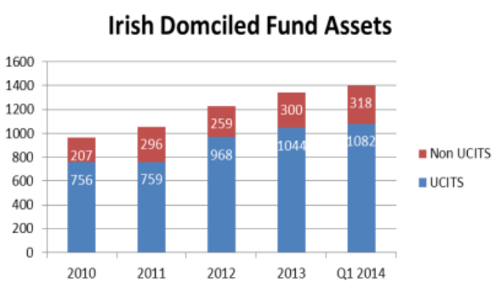 As we noted in the last newsletter, Ireland was the first approved domicile for a China A shares ETF. In June 2014 (Source: Ignites Europe) the Chinese authorities confirmed their plans to extend mutual recognition of mutual funds to “overseas markets”. This is a significant development for UCITS funds as initial indications noted that such recognitions may have been limited to Hong Kong domiciled funds only.

Ireland’s strength as a leading fund domicile continues to be recognised – a recently issued EFAMA report* found Ireland to be Europe’s leading jurisdiction in fund processing standardisation. The report noted Ireland’s average order processing rate to be 85.6% in Q4 2013 – significantly ahead of other jurisdictions.