2012 will be remembered as the year of the bond fund. The year saw a new record set with €201bn net inflows into UCITS bond funds. PIMCO, one of the most recognised bond brands, finished the year with inflows of €34.1bn. 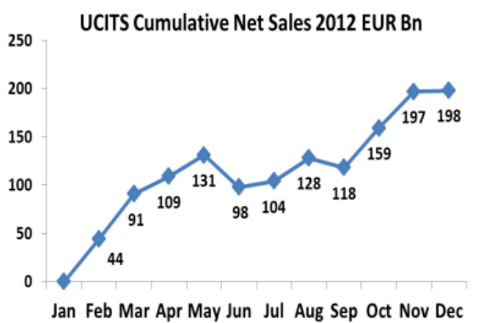 Equity funds ended the year relatively flat (net inflows of €1.7bn) although on a positive note, the last 4 months of the year all had net inflows. This cautious bullish sentiment has continued into 2013 with continued allocations into equity funds

Indicators such as gross leverage at Prime Brokers continue to increase (an indicator of additional long positions taken by hedge funds). However another key indicator- US mutual fund cash level- is at a historic low which typically indicates a market peak (and oncoming sell off). Such conflicting signs add to the level of caution.

Overall though, long term funds (UCITS excluding money market funds) had inflows of €234.4bn in 2012, making it the fifth best year of the last ten years.

French domiciled funds account for 17% of the overall UCITS & non-UCITS market with an AUM of approximately €1.5tr*. Coupled with assets of cross border funds sold into the country, France is the largest consumer of funds in Europe.

Although these headline figures are impressive, cross border managers should be aware that there are extremely high barriers to entry for those wishing to access the market.

Firstly, the market is dominated by local banks in terms of product offering. Money market funds account for over 50% of fund assets – most of which are provided by large well-known local banks. 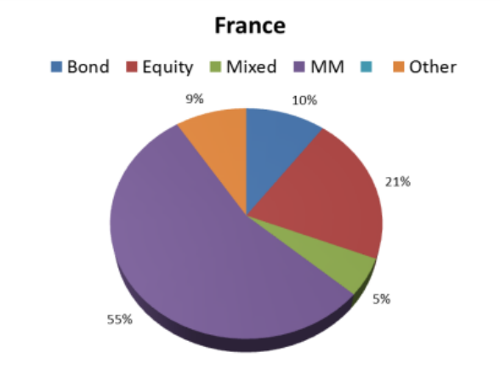 Insurance companies (31%) and retail banks (23%) are the primary channels although pension funds (19%) have significant influence.

Irish domiciled UCITS funds had another successful year accounting for 45% of all European sales in 2012.

The chart below** shows the steady growth in non-UCITS assets in Ireland over the last 5 years. 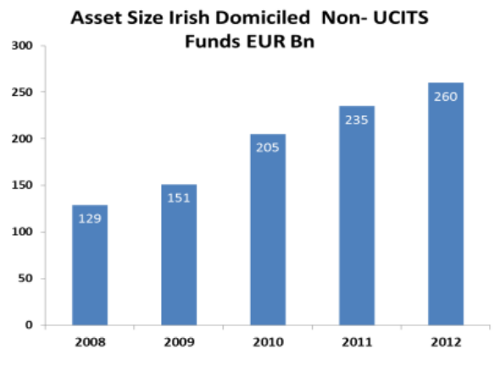 With AIFMD looming over the alternative space (to be implemented in July 2013) managers are increasingly looking at Ireland and specifically the QIF product for their alternative funds marketed in Europe.