The UCITS funds’ market continued its upward trajectory in Q2 2014 with positive inflows of €148bn for all long term asset classes. Allocators continue to favour bond and balanced funds ahead of equity funds. 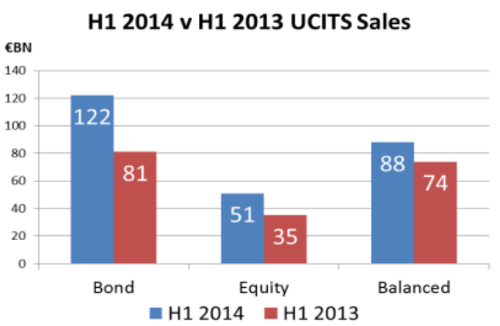 UCITS fund flows saw a dramatic year on year increase of 193% for H1 2014. Bond and equity funds were the primary sources of this growth with increases of 50% and 46% respectively on H1 2013.

So what changes in a year? Clearly allocators have taken a bullish stance on global recovery as many indicators pointed towards an upward movement in the economic cycle (global growth estimates 2015: 3.5%, 2016 3.8%)*. As this newsletter has cited previously, the ultralow interest rate environment used by central banks to stimulate economic recovery has also forced a search for yield with funds benefitting.

Recent geopolitical events (Ukraine, Hong Kong, Middle East) may lead to a reduction in allocations later in 2014. Such events have led the IMF to cut their 2015 global growth forecast by 20bps** further compounding a bearish sentiment.

We watch with interest as these events play out in fund flow figures over the coming months.

Germany has been the most popular European destination measured by UCITS fund registrations over the last 5 years*. The important “Spezialfonds” (funds sold exclusively to institutional investors) industry crossed the €1trn asset threshold in 2013, a significant milestone. 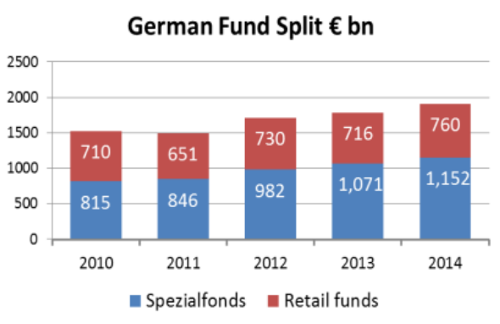 In the first half of 2014, the German fund industry reported a net inflow of €46.1bn, €34.6bn of which went to Spezialfonds. This growth in assets is significant in light of continuing trends in the German fund market, which has seen diminished asset growth for the last number of years.

Germany is one of few EU countries that will require nonEU AIFMs of non-EU AIFs to appoint an entity to carry out the so called “depositary-lite” duties, a requirement under the AIFMD generally applied only to EU AIFMs marketing non-EU AIFs. Additionally, distribution of nonEU AIFs without an AIFMD marketing passport is proving to be a costly and time consuming process (estimated 2-4 months).

Recent changes in independent advice rules for advisors and tax transparency rules for funds (August and September 2014) will have implications for fund distribution and potentially give non-German managers an opportunity to compete in this key market.

Yet again we have seen strong growth in Irish domiciled fund AUM (UCITS and non UCITS). Q2 2014 saw an increase of 7% bringing the H1 2014 increase to an impressive 11%.

QIFs outpaced UCITS in AUM growth terms (16% versus 11% H1 2014) with much of this outperformance attributed to the impact of AIFMD.

Source: IFIA The quarter saw confirmation that Ireland is the second largest European fund domicile having surpassed France for the first time (Irish fund assets surpassed French fund assets by €15bn to stand at €1.16trn as at June 2014).

Ireland also announced the introduction of the first dedicated European regulatory regime for loan origination funds. This regime has been broadly welcomed given the significant demand for alternatives to bank financing.