The second quarter of the year saw a slowdown of inflows into long term UCITS funds (€144bn down from €283bn in Q1). Geopolitical tensions in Europe (Greek debt) and concerns over potential US interest rate increases were primary drivers. 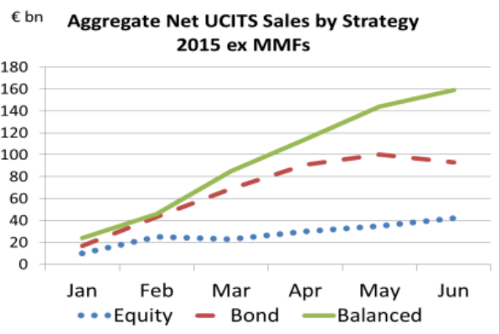 Of these inflows, equity funds had the lowest net inflows during the quarter (€22bn), a clear product of the “risk off” environment. Credit funds certainly fared better with €32bn of net inflows but as with previous updates balanced funds enjoyed the highest net inflows with €72bn for the quarter.

While the referenced data has a time lag, it would be remiss of this author not to mention the impact of August 2015 (EM crisis) on fund flows.

Early figures indicate outflows of €19bn for August on the back of the extreme market conditions. Interestingly, this figure is approximately half of the outflows experienced during the last major market disruption (taper tantrum) in June 2013. Readers will not be surprised that one asset class was a net gainer during August, this was balanced funds.

With increased volatility on the horizon (US Fed rate hikes, commodity price weakness, geopolitical tensions) we see little change in the views of allocators.

The United Kingdom is a key money market centre both in Europe and around the world. While a modest 11% of EU investment funds (€1.2tr) are domiciled in the UK, the true significance of the UK is measured by the €9.3tr of assets that are managed by investment managers locally (source: Investment Association).

Arising from the well-publicised introduction of RDR on 31st December 2012 (banning retrocession fees) we have seen three key trends emerge: (1) increased pressure on management fees, (2) an increase in self-directed investments and (3) an increase in sales of passive products.

Passive/tracker funds sales have seen record sales since RDR was implemented and now account for over 10% of local industry funds under management (source: Funds Europe). We believe this trend will increase over the coming years.

In terms of the current trends, H1 2015 has seen net inflows of €5.3bn for funds sold exclusively in the UK (source: Lipper). The headline figure does shroud the overall volatility – there has been heavy outflows from equity (- €5bn) and bond funds (-€3bn) which have been offset with strong net inflows into balanced (+€9bn), property funds (+€2bn) and money market (+€2bn).

The primary distribution channel remains the IFA channel (50%) with Pensions (13%) and Institutions (12%) the next most significant channels. The relative importance of each is certainly set to change.

Irish UCITS funds had net outflows of €48bn in the second quarter of 2015 bringing AUM to €1.4tr. Overall assets in Irish domiciled funds (UCITS and AIFs) decreased by 2% to €1.9tr. Growth in the number of sub funds was quite flat with a 1.9% increase. 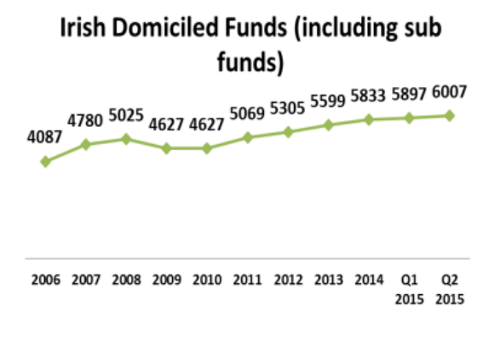