There was a recovery in UCITS net sales in Q2 2016. Second quarter net sales were €71bn compared to net outflows of €6.5bn in Q1 2016. A total of seventeen European countries registered net inflows in the second quarter with the main European cross border domiciles (Ireland and Luxembourg) recording the largest net inflows. 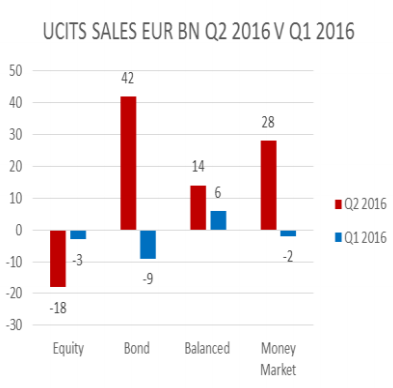 There was a substantial increase in the demand for bond funds and money market funds in Q2 which can be partly attributed to renewed expectations of further decreases in interest rates.

As displayed in the chart above, equity funds experienced net outflows during the second quarter. Equities in the Eurozone initially performed well during Q2 however the overall quarter performance was negative. A number of factors contributed to the overall negative performance with the most high profile being economic uncertainty following the Brexit vote. Other contributing factors included uncertainty as a result of the hung parliament in Spain following the recent election and concern over the scale of bad debts in the Italian banking sector with Italian banks holding €360bn worth of bad debt.

The total net assets of investment funds domiciled in the UK is significant (€1.3tr). The true importance of the UK as a global financial hub is demonstrated by the approx. €8.9tr of assets that are managed in the UK.

Given the scale of the UK market, the Brexit vote in June 2016 will have a significant impact on the overall European funds industry. UK funds suffered their highest recorded quarter of net outflows in Q2 2016. In the month of July directly following the Brexit vote, UK domiciled funds had redemptions of €5.5bn.

The implications of Brexit for UK asset managers is unclear. If the UK leaves the EU without any agreement on access to the single market and is deemed to be a “third country”, there will be many implications including:

1. UK MiFID firms will likely be unable to benefit from the new “third country” passport to be introduced in 2018 under MiFID2.

2. UK AIFMs will lose their marketing passports within the EEA. It is unclear whether the UK will be considered an equivalent regulatory environment or if it will need to be freshly assessed for the AIFMD “third country” passport like other non-EEA jurisdictions.

3. UK management companies will not be able to passport services to UCITS funds domiciled in the EU. Currently no “third country” passport exists under UCITS although it is reported that the UK will push for this to be included under UCITS VI.

The total assets of Irish domiciled funds was €1.917tn at the end of Q2 2016. Among the major UCITS domiciles, Ireland reported the largest net sales in Q2 (€52bn). Over 90% of fund net sales in Ireland in Q2 were in UCITS. 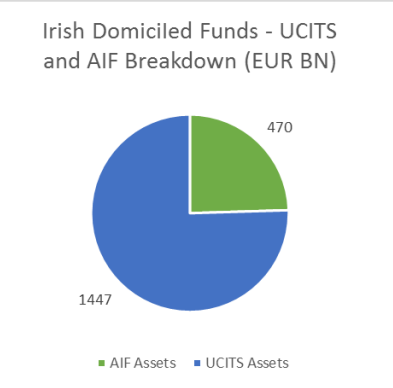 1. Details of the responsibilities of designated persons under the six managerial functions.

2. Guidance on the location of directors/designated persons.

3. Guidance on the information required in business plans.

Final Guidance on CP86 is expected before the end of 2016 with compliance expected within 12 months of the final guidance.

You can download a copy of our Funds, Flows & Facts – October 2016 here