The second quarter of 2017 was mostly characterised by gains in global equity markets. In the Eurozone, reduced political risk following the French election and positive economic news regarding the business climate in Germany contributed to initial gains. During the quarter, the ECB commented that the threat of deflation is likely to be over.

Bonds also performed relatively well during the second quarter. However, in the latter part of the quarter, there was a pullback in both equity and bond performance. This was driven by comments from central bank leaders in the US, Europe and the UK regarding tighter monetary policy. It is anticipated that ECB economic stimulus measures could soon be withdrawn. 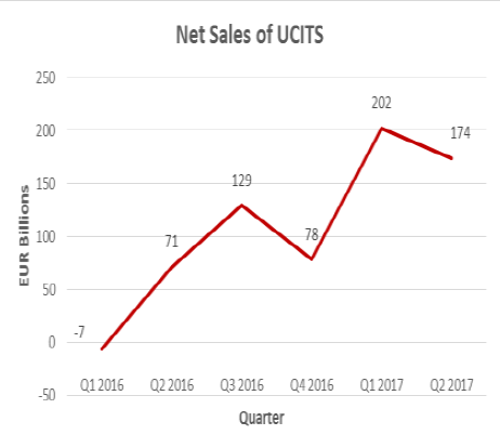 A total of 24 countries registered net inflows into UCITS in the second quarter of 2017. So far in 2017, bond funds and multi-asset funds have attracted the largest net sales with EUR 168bn and EUR92bn respectively. Flows into money market funds reduced in Q2 2017 which is likely the result of reduced market uncertainty in comparison to 2016.

Funds domiciled in the Nordic region (Denmark, Finland, Norway and Sweden) represent 5.6% of the overall Net Assets of European domiciled funds (UCITS and AIFs). However, the overall size of the investment funds market in the region is large with total assets of over EUR1.2tn. Many funds established by Nordic managers have been established in cross-border domiciles such as Luxembourg and to a lesser extent Ireland. 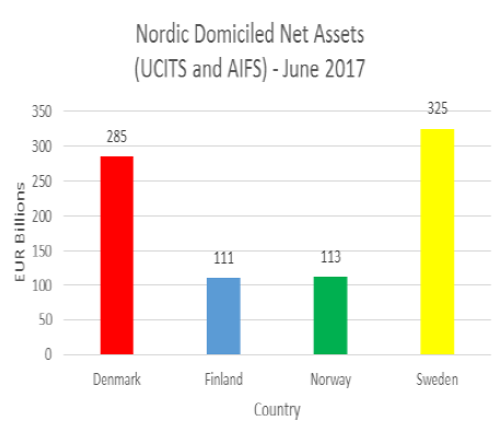 The Nordic region is very sophisticated in terms of fund selection with a high level of openness to foreign fund managers in comparison to other European fund domiciles. Sweden has historically been a pioneer in the field of mutual funds with 4 out of 5 adult Swedes using mutual funds for saving purposes.

Private and retail banks are the main distribution channels in the region in addition to local fund providers. IFAs and platforms are also active in the region. 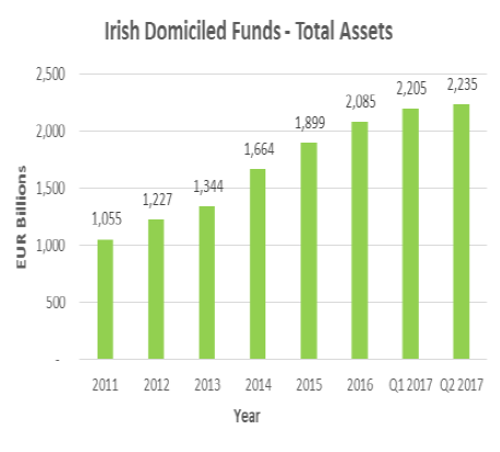 In October 2017, the Central Bank of Ireland (“CBI”) announced the upcoming publication of a survey studying the outsourcing arrangements in financial services companies. Gerry Cross, director of policy and risk at the regulator, has said that the CBI is looking to “gain further insight into the current and future pattern of outsourcing arrangements from a cross-sectoral perspective”. Earlier this year the CBI warned that the level of outsourcing is likely to be close to the limit of what is appropriate for this industry. Despite this word of caution from the CBI, the overall trend in the Irish funds industry remains very positive.