Q2 2019 was characterised by the continued bond rally and persisting outflows from equity funds as can be seen in the chart. 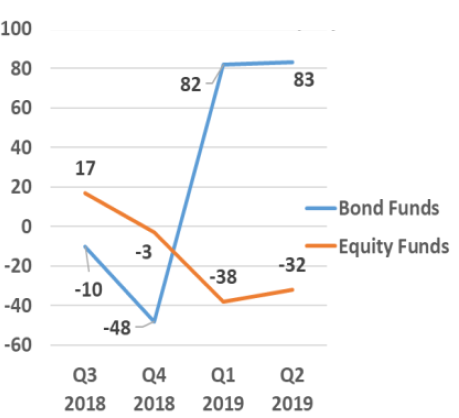 Slower growth and reduced inflationary risk increased the attractiveness of government bonds as safe haven assets. In addition, expectations that central banks would keep monetary policy loose and reduce rates further were factors in increased bond inflows. The US-China trade war and Brexit resulted in global growth worries and stock market volatility. This led to a rise in investor risk aversion and a corresponding fall in the demand for equity funds.

Europe’s largest economy, Germany shrank in Q2 2019. Germany is an exporting powerhouse and demand for its products have reduced due to an economic slowdown in China and Brexit uncertainty in the UK. 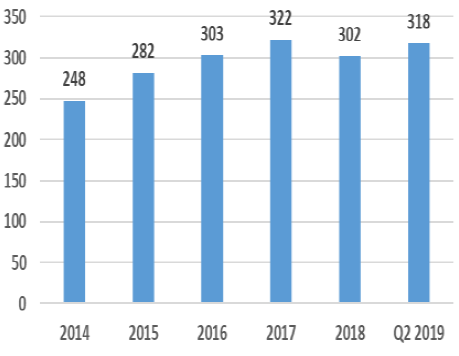 Although fund flows in the first two quarters were positive most recent data suggests that investors have pulled money from Italian funds. Italian investors, who traditionally prefer fixed income funds, have been put off by increased volatility in Italian government bonds due to political upheaval and a budget row with the EU.

In a recent Morningstar global investor fee survey, Italian funds were shown to have some of the highest expense ratios in the 26 European countries examined. The report states that investors are routinely subject to initial charges and retrocessions.

Irish domiciled fund assets increased by 2.5% in Q2 2019. This compares favourably with the overall European fund asset Q2 increase of 1.7%. 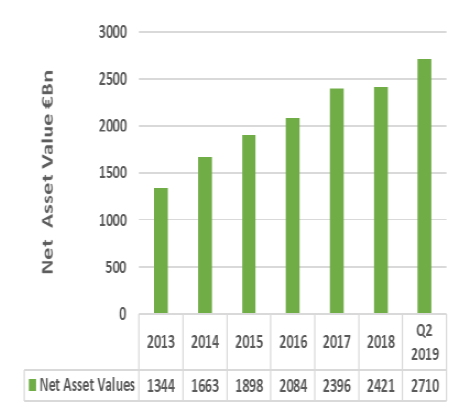 In 2018, the CBI published guidance in which it confirmed that it would no longer require certain financial indices to be submitted for review prior to a UCITS fund investing in such indices. In place of this, the UCITS ManCo was required to provide certification that all indices invested in were UCITS compliant. In July 2019, the CBI made a welcome update to its guidance so that certification from a UCITS ManCo is only required: